14 NovBloodsister Update – All the best Sibo!

It’s a while ago since we’ve prepared a blog post about our work. I am really sorry about that, but we had some reasons for it. It was a quite intense time working with Sibo and we’ve also had some structural chance in our foundation. Because of lack of time we stopped social media and focused on the most important things. It was not really fair because usually we are very exerted to keep you updated about our work. Now I would like to take an opportunity to inform you about what has happened this year and how bloodsister has developped. But first of all: yes we still exist! 🙂

Throughout the year our work has been almost exclusively revolved around Sibo, after Siviwe and Safwaan decided to focus on other things. Appart from that we had some internal problems. The work from Austria with Africa turned out to be a real challenge. Things were not going as they should, which eventually led us to make some important decisions. We decided that it was neccessary to focus only at Sibos life situation and skip the trainig. That’s not really Bloodsister’s vision, but because of his bad living conditions we had no other choice. How should we intensify Sibo’s training when he has nothing to eat?

From January until June we focused on Sibo’s diet. Once a week Moritz and Sibo went shopping to buy healthy food. Moritz tried to implement new products into his daily diet and tought him how to prepare his meals. It was not the easiest task and sometimes took a bit of persuasion to motivate Sibo to try new foods, which often pushed us to our limits. Every day Sibo had to send us images of everything he ate. This was important for us to monitor and supervise if he implements the new knowledge into his daily life. We also provided him with simple recipes and repeatedly sent him photos of our food to motivate him to try out new things. Slowly, however, we could see progress. I was most pleased when Sibo himself began to feel the new diet affecting his body and improving his performance. Mission accomplished and first milestone on the way.

He he was quite challenged at this time, because in addition we enabled him to attend an english course. At the beginning he was very enthusiastic, but when it got serious he felt overwhelmed and was afraid to fail the course. With much conviction, Moritz and I managed to motivate him to at least try. Of course, he had to get used to the new situation but he soon developed into a model student. He did his homework and started reading English literature regularly. He made progress – small – but at least 🙂

What worried me was that Sibo’s job situation didn’t improve. The shop he worked didn’t go well and he only reveived irregular wages. For this reason it was impossible for him to eat healthy without our monthly food budget. Again and again we sought the conversation with him to work on a plan how to change his job situation. Sometime in the summer we reached the point where I had to let go of Sibo. It was a strange feeling for me, because I felt responsible for him and his future. However, we had already accompanied Sibo for over 2 years and he had developed a lot during that time. I was not sure if he was ready, but in the end, you have only one choice – try it out. Although I am not yet a mother, I felt like one. I had to send my child into a responisble life. It was an important, but not an easy step for Sibo and me. Like a mother, I could only do one thing, encourage him and be there if he needs support. It was a great learning experience for all of us.

In retrospect, it was absolutely the right decision. Sibo is developing magnificently. He has a new job and is a freelance salesman for the sports brand Umbro. At the end of November, he organizes his first soccer event, in which different teams can compete against each other. Sibo is smart and motivated, but most of all, he has not lost his big heart. It’s exactly what I’ve always wanted. Sibo has founded his own foundation and now enables children to practice different sports. (where he could need some helping hand from a designer – if anyone is willing to help) It’s still a long way to go, but he has made the first steps into a new life and has great private and athletic goals for the future. He wants to get his driving license, participate in a race in France and save money to build a good life.

I think it was the perfect time to let him go and let his life take shape. But Sibo is and will remain an important part of Bloodsister. We are still there to provide advice and to support him where we think it makes sense. Sibo is no longer a Bloodsister talent, but a Bloodsister Ambassador who carries our vision. And that makes me incredibly proud. Although we have not achieved our initial goals, we have achieved our goal. One of my most important learning lessons of the past few years was not just stubbornly walking in one direction without feeling the surface and enjoying the beautiful scenery, but maybe occasionally branching off to a more beautiful path.

But most importantly: always keep cool! 🙂

PS: There is a new project on the way! Stay tunes, I will keep you posted about it! 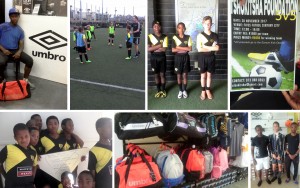